Here is a new and delightful cartoon collection of the HUMF AND THE FLUFFY THING!
This DVD became available today 12th September 2011.Undoubtedly the rising star of pre-school television, Humf is back to entertain your little ones in the new DVD Humf and the Fluffy Thing.
Available to buy from 12th September 2011 priced £9.99 RRP Cert. U from Entertainment One, Humf and the Fluffy Thing is packed with 10 fun-filled adventures and includes a bonus disc containing an additional 6 episodes absolutely free.If you don’t know about Humf, where have you been? He’s a lovely furry thing. He is short and round and purple and cuddly. At three years old, Humf is full of wonder at the world and is always eager to explore the new things he sees around him and it’s this that forms the basis of his many delightful adventures with his best friends Loon and Wallace.Humf, narrated by leading British actress Caroline Quentin, can be seen everyday on Nick Jr where it has been entertaining young children and parents since 2009. The show currently ranks in Nick Jr’s Top 5 shows and following unprecedented consumer demand, the first Humf books and toys will launch this Autumn ensuring that Humf tops pre-schoolers wish lists this Christmas!

Hope you will be buy and let your children enjoy this fantastic collection of cartoons! 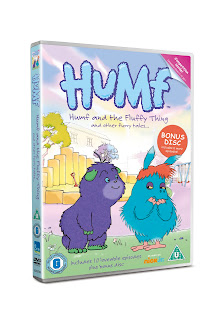 For all my readers the PR company which make me aware of this new DVD offers this Humf colouring sheet: 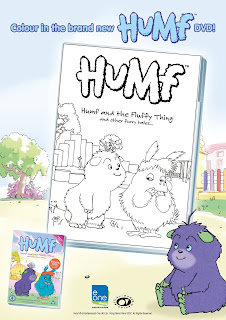 If you would like to WIN a DVD copy of this cartoon just complete the following steps:

GOOD LUCK!this competition is open until the 18th of September to UK residents!
PS: If you already follow my blog you can still enter this competition!