On this blog I posted Romanian pictures, Romanian recipes and Romanian superstitions but I missed sharing with you my lovely readers some of the Romanian folk tales.

This story that I am going to write down for belongs two Ion Creanga. He is one of the greatest Romanian writers and a true storyteller. He was born in 1837 in a village of white-washed houses,high in the Carpathian mountains surrounded by dense forests. He spent a happy childhood there. His folk tales gives us an insight into life in the village he grew up in and as you will see in the below tale, they often have an universal moral. Five Loaves is such a folktale in which you might find some present-day validity. It will be lovely to read it to your kids anyway. 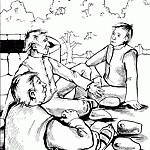 Mihai Eminescu and his heritage