A couple of weeks ago I shared with you a few Christmas Carols that are traditionally sang in Romania for Christmas. I wanted to share with you more but as we’ve been away for Christmas I didn’t have the opportunity. But as today is the New Year Eve I wanted to share with you one of the most popular carols that kids around Romania sing on the first day of the year. The name of this carol is SORCOVA. I don’t have a translation in English for it though but I will try and describe what it is…

“Sorcova” is a special bouquet used for New Year’s wishes early New Year’s morning. Children wish people a “Happy New Year!” while touching them lightly with this bouquet. After they have wished a Happy New Year to the members of their family, the children go to the neighbors and relatives. Traditionally, the “Sorcova” bouquet was made up of one or several fruit – tree twigs (apple-tree, pear-tree, cherry-tree, plum-tree); all of them are put into water, in warm place, on November 30th (St. Andrew’s Day), in order to bud and to blossom on New Year’s Eve.

See below the words of the SORCOVA:

Merry Sorcova,
May your health be strong
And you life long:
As an apple tree
As a pear stately
As a rose bush fair
Blossoming beyond compare:
Strong as a granite rock
Quick as an arrow’s shock
Hard as an iron bar
Tougher than steel by far,
Over summer, over spring,
May your health be great
A New Year with happiness
And in everything success.

Nowadays people often use an apple-tree or pear-tree twig decorated with flowers made up of colored paper. I remember this tradition with such a pleasure. It is something to look forward to it for kids.
The children receive all kinds of treats such as: cakes, honeycombs, biscuits, pretzels, candies, nuts, money. 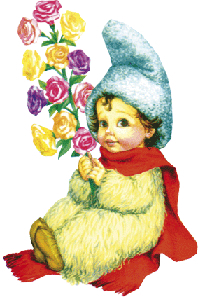 The Goat and Her Three Kids