So yesterday I decided to use my slow cooker again. I think we bought it about 5 years ago but only used it a couple of times – maximum 10 times. I think is just that I find it a bit difficult to just forget about the conventional way of cooking
.
But yesterday it just seem handy to just put everything in the slow cooler and leave it cook while I was cleaning up the house.
So then I put a litre of water in the slow cooker and cover just to let it boil for a little bit. In the meantime I just prepared the vegetables. You see in Romania we don’t actually liquidise the soup after its all boiled so you have to make sure that you cut your vegetables as you like.
So…I used one small onion that I cut really finely and add it to the boiling water.
So the I just went on with cutting the rest of the vegetables that I wanted to add to my soup:
1 carrot
1 parsnip
1 courgette
1 pepper
2 small potatoes
I cut them all as I liked – really small and added them to the pot and cover. Now I left it for like half an hour or so and then added brown rice – about 50 grams.
After another half an hour I added a tin of chopped tomatoes and let it boil for about an hour.
When finish just add a bit of salt,pepper and some lemon salt-this last ingredient makes the soup to have a sour taste. You can very well just use lemon juice instead.
Here is the end result: 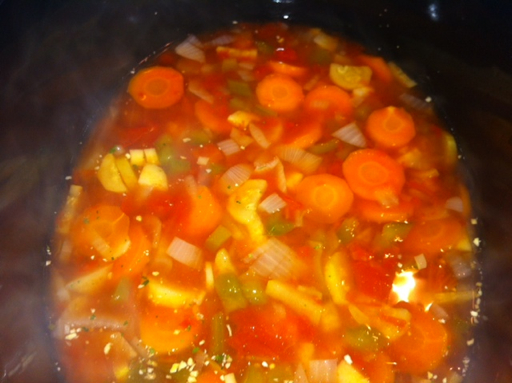 We just love this soup In our family. It cleanses the body and is low fat as well!
Of course it can always be cooked on the hob as well.
Please note that I had the slow cooker on high.