Maria Tumolo is a lovely lady that blogs over at Tiger Tales. When she heard i was looking for guest post she was very kind to offer to write a post for me. Soon enough we start chatting even more on Twitter and we became twitter buddies. You can find her on Twitter as @Msxpat. Here is her lovely guest post:

A long way from home 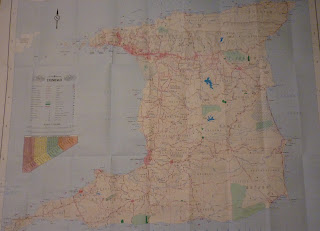 They say that you always remember where you were when a major life event has occurred. Usually when ‘they’ refer to a major event these days, it’s the death of Diana, Prince of Wales or September 11th 2001. On the morning of September 11th 2001, I was awaking to my second day in England.
I came to England for my first big adventure away from home. It was my intention to study for a Master of Arts (MA), after working a bit. I’d been on smaller trips in the Caribbean prior to coming to England as a child to visit relatives in St. Vincent and Barbados. Oh let’s not forget ‘that weekend’ in St. Lucia which was the beginning of a long goodbye to a certain person in life at that time. Coming to England was a much bigger affair as I travelled on my own and I had made all the arrangements myself. I was to live with the family of an English friend and work colleague, in Cambridgeshire. 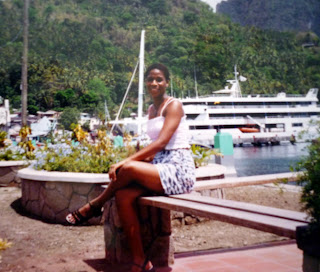 I arrived on September 9th 2001. I can no longer remember what day it was but I assume it was a Saturday as most flights from Trinidad to England departed Piarco International Airport on a Friday and landed in Heathrow International airport on a Saturday. When I landed on that morning, I’m not sure why but I felt I’d come home. I realise this is a strange notion for English people to understand. However, coming from the Commonwealth where we are practically feed a steady diet of all this English or its derivative, for many of us we feel we know more about England and the English than about our own. That said I felt no homesickness at all. The house I was staying was big with a massive garden and beyond that just open expanse of green. I loved it from the first. And I was made to feel like part of the family, I settled in quickly.
Then on September 11th I awoke to catch the news headlines. I saw a plane crash into a tower! I stood stock-still waiting for story, as the news emerged it turned out I had just witnessed via BBC news the one of the planes that hit the World Trade Centre in New York. It was a terrorist attack! There was talk of retaliation, talk of war and all sorts. I was scared out of my mind. ‘Why did I have to be away from home and my family at a time like this?!’ was all I could think.
As I was staying in Harston, Cambridge, for many nights following that fateful day I could hear aircrafts taking off. I was told that there was an army base not too far away. As you can imagine my over-active imagination was in over-drive! I had visions of some sort of attack happening near us, as England was now on high alert for terrorist attack. In the months that followed on trips to London I experienced enter street blocks being blocked off and major bus stations and tube stations being closed down to the sound of alarms. All it took was one piece of unidentified luggage to cause a security alert. I was constantly on edge especially when visiting in London. One on such occasion, an alarm went off when I was in the ladies of Victoria Coach Station. For what seemed like minutes I forgot how to get out of the loo! Then a little small voice said ‘be calm, be calm’ then, the fog in my head cleared and I found my way out onto the streets as the station was being closed. 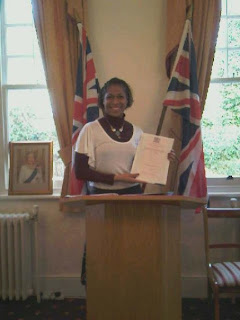 A lot has changed since my early days in England and some things have stayed the same. We are still on alert for terrorist attack but I believe the level of level has been dropped. And although some years later there was the July 7th 2005 bombings in London, I’m marginally less anxious as I’ve had time to acclimatise. I’m now married with one son and living in Greater London. I never did get that MA though. England is now really and truly my home and I’m happy.

A bit about Me
I’m an expat mom, originally from Trinidad, West Indies. I now live in the Greater London, England. My blog Tiger Tales is about my son and I. He’s part Chinese Italian part Black West Indian. He looks totally like his dad, who’s Chinese-Italian. The blog is named in honour of my son, as he was born in 2010 the Chinese Year of the Tiger. Some
of our experiences are sometimes funny or just plain annoying. I write about my everyday experiences as a first-time ‘older mom’ and I chart some of his milestones.
Maria Tumolo (MsXpat)
http://tigertales-msxpat.blogspot.com
[email protected]

7 Tips for Surviving Your First Christmas with a Newborn

How to be frugal