In my home country Romania, spring starts on 1st of March with the celebration of Martisor. But Martisor is not the only tradition for the month of March. We also have “Babele” and “40 Mucenici” and the 8th of March which is “Mother’s Day”.

Babele The first 9 days of March are called “Babe” and as you can imagine they are very important for Romanians. I grow up following all the Romanian traditions as taught by my grandmother and she was also very religious. This tradition persuades every single person to pick a day and if that day will be beautiful and sunny then it means that the rest of your entire year will be the same. Obviously if the weather will be bad and it will rain than it’s bad news!

“Babe” or the articulated noun “Babele” means “old ladies” in Romanian and it has derived from an agricultural tradition used by people to predict how the year is going to turn out. In the rural sides of the country “Babele” has the same meaning today as it had once, still being an essential part in peasants’ life.

The legend has it that the first day of March is the day of the old lady Dochia, an ancient agrarian divinity who climbed the mountains with her son (Dragobete) wearing 9 coats. In the first day, it started to rain and she took off one coat, the second day she did the same thing as the rain didn’t stop and so she continued by taking off all of her coats and ending tragically- freezing in the top of the mountain.

They say that the story has happened in Bucegi Mountains, in the heart of Romania and as peculiar as it sounds, the unusual rocks figurines formed on the top of Bucegi Mountains (at 2200m altitude) embodying the old ladies, are strangely connected to this legend.
See pictures below: 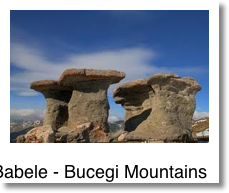 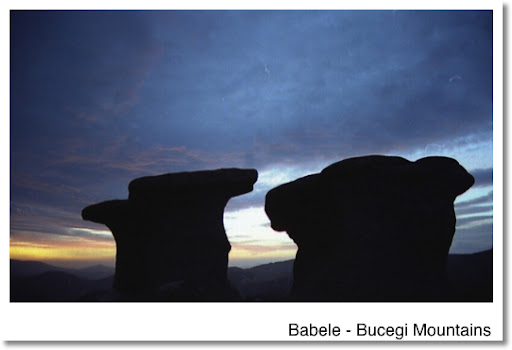 40 Mucenici – 9 March represents the day of the 40 saints called “Mucenici” (martyrs) or “mosi”- old men. The “40 Mucenici” or “44 Mucenici”- in some areas of the country, is celebrated by almost all Romanians. Women are baking human shape cakes for the entire family while a few are taking to the church and given to the poor. In some areas of Romanian they make a cake by wheat meal and they put a golden coin in it (like with the Christmas cake-or at least this is what my hubby says). The cake is then cut in equal slices, one for each member of the family. The one who finds the coin will be the luckiest one.

On another note, on 9 March people, especially men, should drink 40 (44) glasses of wine and during the year, the wine will turn into blood and power. As you can imagine the Romanian men like this tradition. My grandfather told me that when he was young they use to drink “tuica”(a homemade vodka) from small glasses and then throw them on the floor to break so that the bad luck will go away. Of course this is not something it happens our days.
There are also various legends behind this holiday, each of them representing different areas of the country but, in the end Romanians like to celebrate and, considering the high number of full glasses involved and the fact that men also consider 9 March as being Men’s Day, you can easily realize that “Mucenicii” will become a hell of a party until midnight.

“Mucenici” is a traditional holiday with religious connotations, representing, in the Orthodox calendar, the 40 saints from Sevastia city who have been burned alive.
Another legend says they were soldiers in the Roman army, but of different nationalities : Greek, Armean and Roman. It was around the year 308 when the Roman emperor Licinus was ruling. They were in Armenia when their commander, Agricolae, found out about their Christian beliefs and asked them to give up to their beliefs and change to Roman idols. The soldiers wouldn’t do that so the commander ordered their torture by throwing rocks at them. Agricolae even tried to bribe the soldiers with expensive gifts, but it was useless. So he ordered them to be drowned in a frozen lake. It was Spring and still freezing, but while the soldiers were in that lake, praying, a miracle happened and the lake got heated and each got an aura above their heads, so they were saved. However, they were tortured to death afterwards and their bodies were burned and thrown in the lake.

The soldiers’ martyrdom has been celebrated eversince in our country as they became Saints Martyrs through this miracle. For their mentioning, we cook some delicious cookies, which have the same name of ‘mucenici’.

They are cooked differently depending on which of our geographical zones they are made. But all must have the shape of the number 8. This 8-shape symbolizes a human figure, of the Saints.
In the Muntenia and Dobrogea region, the Southern part of Romania we are making ‘Mucenici muntenesti’ which are also called the ‘mucenici’ soup. The soup is made of very small pasta eights, cooked like noodles, with water, sugar, cinnamon and walnuts. The soup symbolizes the lake where the martyrs were thrown in to drown. My grandmothers and my mum use to cook them when I was a child. Unfortunately I don’t have the proper instruments to make them in England. 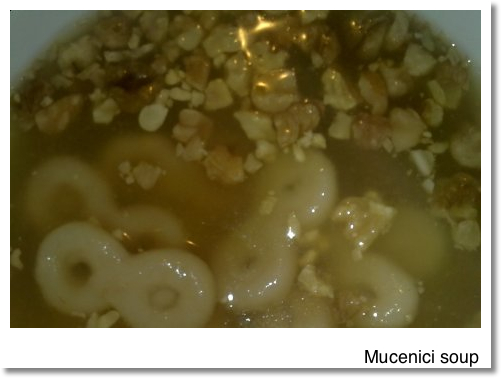 In the Moldavia region, the Eastern part of our country, people are making the ‘Moldavian mucenici’ also called ‘Little Saints’. They must be 40, as in the number of the 40 Saints Martyrs. The Moldavian mucenici are dough cakes which are baked, dipped in orange syrup, then covered with honey and walnuts. 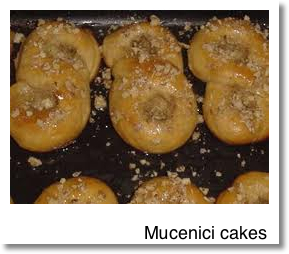 I’m going to try and cook the cakes this year as I think that my daughter will really enjoy eating them. I will try…and then I will post here the recipe as well.

8 March – International Women’s Day and Mother’s Day in Romania – not an official holiday as such but is celebrated across all Romania.

The custom, similar to all customs in the countries that celebrate the day, is for men to give ALL the women in their lives flowers or gifts. Female teachers receive small gifts from their students too, whether boys or girls. The idea is that the female teacher is the equivalent of a mother figure.
After work, women colleagues or friends often dine together, but the greatest joy is for mothers who receive that little special attention from their children. Now that i am in England i am not really celebrating the Romanian Mother’s Day as well as the English Mother’s Day which is changing every year for some reason.
The English Mother’s Day this year is actually on 18th of March which coincides with my daughters birthday.
I will definately call my mother tomorrow to wish her “La multi ani de ziua Mamei!”. I will miss her however even more tomorrow! If you are a romanian living abroad far away from you mum don’t forger to call,sky and tell her that you love her!