“We Bought A Zoo” will be released to the public in UK and Ireland on 16th of March. Thanks to Twenty Century Fox and  Mumsnet i was one of the lucky ladies invited to watch the preview of the movie. I have to say that my hubby was quite jealous because he is the absolute movie fan in our house. But as i really loved this movie it will be a bought and watched on our Blue ray as soon as it is released.
You can watch the official trailer below:
The story line “We bought a Zoo“(based on a true story) – Grieving widower Benjanim Mee (Matt Damon) quits his job as a journalist and decides to start fresh in a new life away from all the places that reminds him and the kids of his late wife which he loved dearly. While searching for a new house they end up visiting this fantastic place with acres of land that happens to be a ZOO. His daughter Rosie falls in love with the place so he decides that buying the Rosemoor Animal Park is the best thing that could happen to his family at this time of grieving. The relationship between Benjamin and his son Dylan is not very good so he believes that by buying this new place he will be able to re-connect with him too. He has to deal with money shortages, lack of knowledge, sceptical staff – headed by zookeeper Kelly ( Scarlett Johansson) – and a host of awkward animals.
Director Cameron Crowe done a really good job directing this movie. Even though the story line is very American, while watching this movie you find yourself crying and then next minute laughing out loud. It is a movie i will watch again and again. It is a movie that i will even watch with my daughter later when she will be older.
Maggie Elizabeth Jones the actress that is playing the little girl Rosie is unbelievable. She is sweet and i think that my little girl will be like this when she will grow up. Maggie is my favourite actor in this movie.
Matt Damon and Scarlett are quite different in this movie too. Never been a fan of Damon but this is now changed because of this movie.
According to Damon the dynamic Benjamin-Kelly provides one of the film’s many surprises. He says
“You would think that they would get together and the movie becomes about that love story, but it’s not.  Among other things, the film is about two characters who both love the zoo.  They build a friendship and closeness out of their shared passion for this project they’re working on together.  And out of that comes this really genuine thing between them, which by the end of the movie, probably becomes something else.”
This movie gives you hope, it makes you cry, it gives you more insight in how grieving is, it makes you smile and even makes you laugh out loud. I truly recommend it to you all and the quote of the movie will stay in my heart forever:
“All you need are those 20 seconds of insane courage,and something great will come of it.” 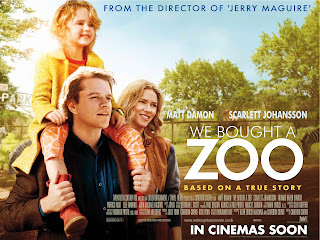 I am already a fan of this movie and “Like” their Facebook Page. I am sure that as soon as you will watch this movie you will become a fan too!
I am a member of the Mumsnet Blogging Network, a group of parent bloggers picked by Mumsnet to review products, services, events and brands. I have not paid for the product or to attend an event. I have editorial control and retain full editorial integrity.

The summer is now in full swing. Fun. Family. Fri

@beefunkyprinting is making masks as well 🤗 so