Car rentals are so readily available these days that they offer a great excuse for dashing off to places you’ve often dreamt of visiting, without having to worry about the often Byzantine public transport systems of some destinations, especially those of Eastern Europe.

Romania is a case in point. Still recovering from the ravages of Ceausescu, whose taste for concrete would have turned the whole country into a giant Southbank Centre given long enough, Romania is rediscovering its fascinating heritage and starting to draw in the tourists.

Anyone with a taste for medieval fairytale castles and a passing interest in vampires will have a field day here, and other perhaps less interested members of the family can admire the stunningly beautiful countryside on the way.

Bran Castle in Transilvania, 16 miles to the south of Brasov, was built by the Teutonic Knights in 1212. They were a military-religious order rather like the Knights Templar and the Hospitallers, but fought in Eastern Europe rather than the Holy Land. It was extended and refortified later in the century by the Saxons to protect Brasov, and according to some accounts Vlad Tepes, the model for Dracula, spent a few nights here. It is one of Romania’s most picturesque castles, beautifully preserved and with spectacular views of the surrounding forest from its hilltop location. It also contains an ethnographic museum with old timber buildings, and much of its furniture dates from the 14th and 15th centuries.

Peles is a German Renaissance palace used formerly as a summer retreat by Romanian royalty before Communism came along and put a stop to that sort of bourgeois nonsense. It is located next to the village of Sinai, about 30 miles to the south of Brasov. The backdrop of the Carpathian Mountains is especially beautiful, and the castle’s 160 rooms contain some of the best examples of European art. With German stained glass windows, Murano crystal chandeliers, Cordoba leather-covered walls and Sevres porcelain vases everywhere you look, Peles Palace is opulence incarnate and surprisingly affordable if you fancy stopping off for the night during your tour of Transilvania. 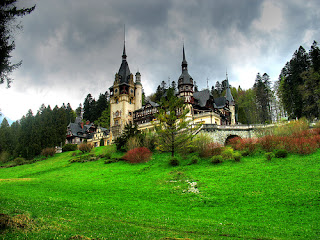 Vlad tepes spent most of his life in one castle or another, and he was actually imprisoned in Hunedoara Castle for 7 years as a young man caught up in the power politics of the time. He was incidentally also held as a hostage of the sultan in Constantinople for several years, so this may help explain his later habit of sticking long sharp stakes into anyone who disagreed with him. Hunedoara Castle, nine miles south of Deva, was built in the 14th century by Turkish prisoners on top of Roman ruins. With three enormous, pointed towers, a portcullis, drawbridge and Knight’s Hall it plays its part of medieval bastion superbly well.

Transylvania, the ‘Land beyond the Forest’ is a place of legend and remarkably beautiful, with excellent roads and driving conditions especially in the spring and autumn, making it the perfect European fairytale getaway.

Come and visit Transylvania and Romania! You will be amazed of its beauty!

Our new bundle of joy 🥰

Let the waves carry you where the light can not.