I never baked anything for Valentine’s Day but today my daughter came from nursery and asked me if we can make cupcakes. First I told her that mummy doesn’t know how but then when she show how disappointed she was I said that I will try.
I picked one of the baking books that my hubby bought for me and kind of found a recipe. I didn’t have all the ingredients in the right quantities but I thought that I should give it a try anyway. Enough blah-blah though….
Here is the recipe: 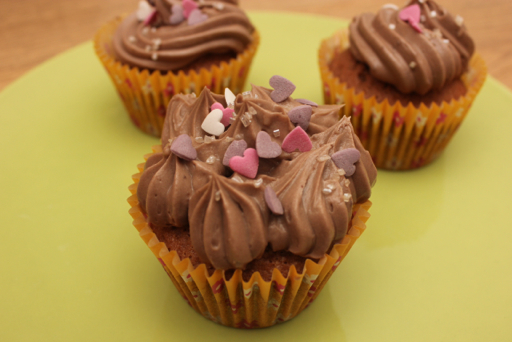 Ingredients for cupcakes:
150g butter
150g caster sugar
175g self-raising flour
25g cocoa powder (this is optional if you don’t have it that is fine)
3 eggs

Ingredients for buttercream:
250g butter
250g icing sugar
Cooking chocolate melted and cooled
Little sugar hearts for decorating
Start by preheating the oven to 180ºC and lay out 12 cupcake cases on a baking tray.
Using an electric mixer mix the butter, sugar, flour and cocoa powder.
Beat the eggs with a fork in a separate bowl.
Add the beaten eggs slowly into the bowl as you are mixing.
Using a large spoon place equal amounts of mixture into the 12 cupcake cases. Put the cupcakes into the oven and bake for 15 to 20 minutes.
Check on them after 15 minutes, they should be firm to touch. (You can also test by popping a skewer into the middle of the cupcake, it should come out clean). If not ready, leave them in for a further five minutes. Remove from the oven and leave to cool.
While the cupcakes are cooling, make the buttercream topping.
Place the butter into a bowl and stir in the icing sugar and vanilla extract using a wooden spoon. Then using an electric mixer whisk until fluffy and lighter in colour.
Put the chocolate to melt in the microwave or in a bowl on top of a pan with hot water.
When chocolate is melted and cooled add it on top of the butter mixture and mix slowly with a spoon.
Once the cakes have cooled completely, put the buttercream mixture into a piping bag with a large star nozzle and squeeze plenty of buttercream onto each cupcake.
Sprinkle the hearts or anything else you might over the top of the buttercream and finally Ta-da! They are now ready to eat!
Hubby was quite impressed with my cupcakes! And as you can guess – Kara was all smiles! 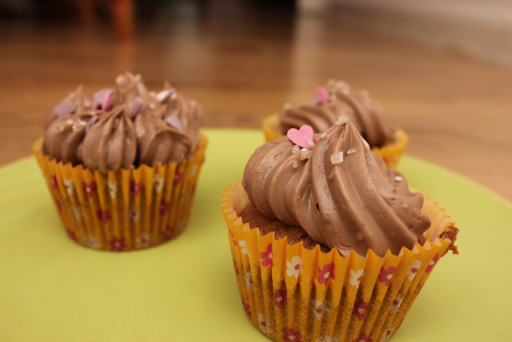 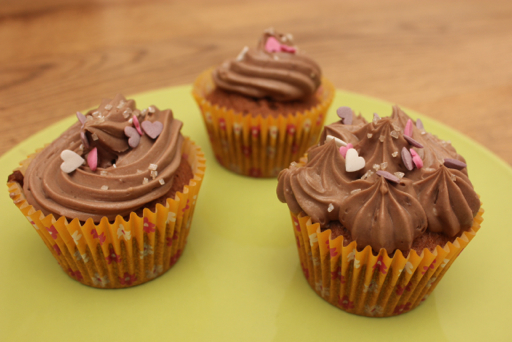 Life is made of little moments of Joy 🤗 pay att