Recently we received a whole bundle of goodies featuring every ones favourite detective. The genius that is Sherlock Holmes. So without further ado lets pop open the popcorn tub and settle down for some great sleuthing….
First off it’s the two fantastic films starring the great Robert Downey Jr. Now as you may be aware (unless you’ve been hiding out with a hermit in a cave located in the foot hills of Tibet) this great actor is going through quite a renaissance at the moment with 2 huge franchises to his name. Of which this was the second to appear, and what an appearance it was. His turn as Holmes is truly one of the best, up there with the great Basil Rathbone himself. Supported by the always reliable Jude Law as the ever put upon Watson. The first is of course the best of the two, offering a fresh and stylish take on the classic character. 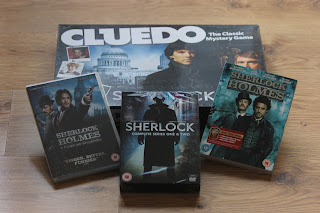 Both films are directed with flare by our very own Guy Ritchie, though he tries to be a little too stylish in the second film during the forest chase. The fast, slow, fast, slow camera work is best left to Zach Snyder (300, Watchmen and the new Superman film Man Of Steel) it just doesn’t belong in Sherlock Holmes. Apart from this little show of excess the film is a strong sequel and I am sure there is still room for one more.
If you haven’t yet seen them then I suggest you go buy, rent or borrow of your mate, both films as they are definitely worth giving up an evening for.
Now if that wasn’t enough….
Sherlock.
In case you were too busy watching some god awful Saturday night talent show or an hours worth of some suicide inducing soap then it’s time you caught up with some good TV. In fact not just good but excellent TV. (Believe me I don’t often Say that about a TV show)
The great modern spin on the classic detective is fantastic from all angles. The story telling pulls you in from the moment it starts. Stays strong through both seasons right up to the fantastic and surprising ending. Combine this with some great performances by Benedict Cumberbatch and Martin Freeman, as Holmes and Watson respectively, and you really do have one great slice of television. 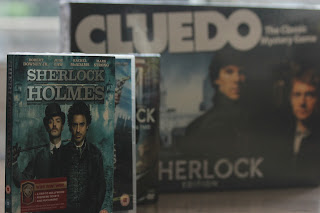 Will they return for a 3rd season? This is the question, but with Freeman busy being Bilbo Baggins in the Hobbit trilogy and Cumberbatch making a splash in Hollywood as the bad guy in the new Star Trek movie. It’s not looking good for a return to the small screen just yet.
Now as if that wasn’t enough…
If you’ve had your fill with watching Holmes and want to do some sleuthing yourself then why not get yourself a Deer Stalker (that’s the classic Holmes hat in case you didn’t know) and a pipe, then settle down to a game of Sherlock Holmes themed Cluedo. Maybe you’ll find Moriarty did it in the dining room with the candle stick! 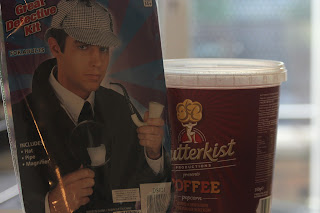 Whatever you decide, I can promise you that an evening in with the great Holmes will not be an evening wasted.
Till next time…..

A wonderful evening with Tinyme!!!!

Own a colour for Valentine’s Day

Food, In the Raw

Life is made of little moments of Joy 🤗 pay att

❤️Moments of life. Moments that we will cheris