As you can imagine i barely stopped myself from crying when i heard my daughter saying that.

How can a 4 and half year old ask such a thing?

To tell you the truth she’s been asking questions about death and people dying for a while now and every time someway or another i managed to get out of explaining her exactly what death is. 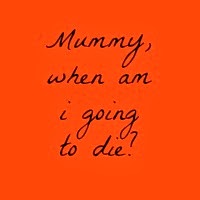 And while she was asking this question she came and sat in my arms so i had no escape!

So this is how our conversation went:

Mummy: Kara why are you asking such a thing sweetheart!

Kara: Mummy, i just want to know that is all…you know daddy’s mummy and daddy died…so….just tell me…

Mummy: But sweetheart nobody knows when someone dies. People die because they are really old or because they get really really ill. You are 4 and a half years old and there is a long time to go until you get old…

Kara: So…mummy…do i die after i grow up and have kids and get married?

Mummy(trying to change the course of the conversation): Do you want to get married Kara?

Kara: But mummy…hm…who am i going to marry? Can i not have kids if i don’t get married?

Mummy: Yes of course you can.

Kara: But how mummy? How?

Mummy: Well when you going to grow up and be about 20 something years old you might meet a boy and if you fall in love then you might decide that you want to get married and have kids.

Kara: But mummy…you know i can’t get married with a boy…i need to marry a prince!

Mummy: Well…you might decide that the boy you fall in love with is your prince..

Mummy: Sweetheart mummy loves you loads and loads and i will be with you forever. Nobody knows when somebody dies but while i am here i am going to take care of you and love you more and more.

Then we had cuddles. Lots of cuddles and although i felt that she wanted to ask more questions i said to her that we should probably watch some cartoon together to which she said:

“I love you too sweetheart!”

Aw…my heart melts every time she tells me she loves me!

That was quite a conversation that i didn’t think i will have with my daughter as such a young age…How did i do?

Did you discuss with your kids about death?

Bracknell is not London