Although we live in the 21st century and the technology has reached a level that people never thought will get to the differences between the people of the world are so many – the places we live in, the access medical care and to education. I sometimes wish that every single person that lives on this planet could have the same. I guess it will be a bit boring isn’t it?  But why some people need to live without worries and some have to struggle for every single thing they get in their life?
In 3rd world countries like Africa people are lucky if they get to be seen by a nurse or a doctor. Only through great charities like Red Nose or Edirisa people can get vaccinated and education.
The difference between Africa and UK from this point of view is huge. In UK everybody can benefit from medical care and get education by going to a public school. Nobody has to contribute with money because everything is funded by the government. Well if you work you pay insurance but that’s about it. But even if you don’t have a job you are still entitled to a GP as long as your residence is in UK.
In Romania however the situation is a bit different. Is not as bad as it is in 3rd world countries but is not as well organised as it is in UK. Our medical system is functioning a bit like the American system which means that people have to pay for their medical care even if they already contribute with insurance from their salaries. That only covers a part of the care. You still have to pay for hospital stay and medication. Yes I know that in UK you need to pay for the medication after you are coming out of the hospital too but at least all of them have the same price. In Romania however the prices are different and if you suffer of a really bad illness then you need to pay a lot of cash too. The medication is free for kids at least though.
However, if you are a stay at home mum or you don’t have a job and you want to get yourself a family doctor is impossible. How crazy is that? I know it might sound crazy to the people that live in UK. The situation is bad and I really think that the Romanian government have to find a way for every single Romanian person or Romanian resident to benefit from medical care.
As you know at the beginning of spring I had a problem with my foot and had to go to A&E to get my foot taken care of. I was seen immediately by the nurse and then the doctor but the money were so little that my dad had to go to the pharmacy to buy bandages and all the other necessary products for my care as they didn’t have anything to look after me. 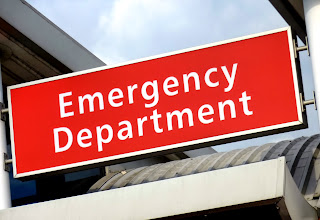 I can only imagine the look on the English people if they need to do such a thing.
Because I didn’t work in Romania and my residence was in UK every trip to the doctor and any bandage and gypsum change meant that I had to pay for the consultation but had to buy the necessary bandages for it too. Plus the doctor was expecting a bit on the side as well so that his care was good enough. If I was to give him too little it would’ve meant that his treatment would have been worse.
I must’ve spent lots and lots in 8 weeks time. I had the money and I didn’t really mind because I wasn’t paying the Romanian taxes but the same can happen to a stay at home mum or somebody else that doesn’t work. SAD!
Paying for treatment is not a problem that people in the UK often come across, but according to a survey it is something that affects 17% of people who say they have had to cancel appointments over fears about cost.
The situation is not different in school unfortunately. Every year at the start of the school parents give money for their kids books and school supplies – puzzles, pencils, paints, pens, paper and so much more. So although the school is public and anybody can get their child in as it happens if you are a poor parent then your child will feel as an outsider.
But why is it so different from country to country?  In UK people are mostly taking things for granted. In 3rd world countries people are happy to get the chance for new opportunities and in Romania people have to pay for every single thing. I have no idea how is it like somewhere else. I know a bit about the situation in America and I know that president Obama is fighting for a change and I so wish the Romanian president and government could do the same.
How is it like where you live? Do you think that is good that there are differences on what people can get from country to country or do you think people around the world should get the same treatment? I am hoping that someday in future the change will happen.

Disclosure: This post was written in collaboration with First4Lawyers but all opinions are my own.