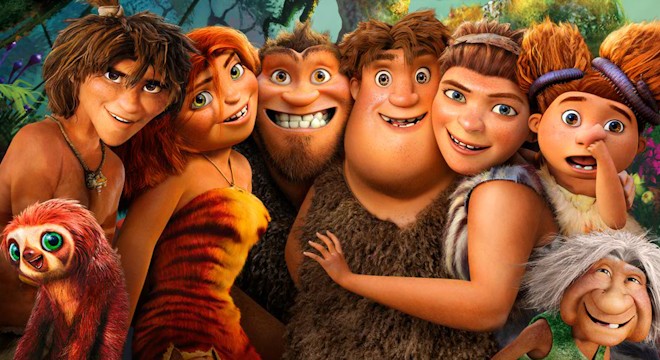 Featuring the vocal talents of Nicholas Cage, Emma Stone and Ryan Reynolds The Croods is a lesson in prehistory like you have never seen before.

Follow a family of unorthodox cave dwellers, as they are forced to venture out into the unknown world after the untimely destruction of their cave. Who would have ever predicted the break up of the continents would happen right in their post code.

Along the way you will see such strange creatures as the Bearowl, Piranhakeet and the Giraffeoceros to name just a few. All of whom look like the freaky creations of a crazed geneticist. You will also witness an array of inventions (all be it in a rather crude first generation fashion) such as sunglasses, the belt and, my favourite, the snap shot.

The animation is stunning and in some instances almost photo realistic (excluding the croods themselves) and the story is thoroughly engrossing with a good balance of comedy and drama. Does this rank up there with Dreamworks Shrek? No. But Shrek did set the bar very high. But does this rank as one of the most original and funny animated films of recent times? Damn right it does. 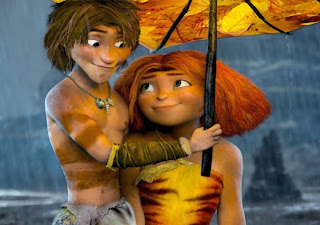 Also on the disk there are some genuinely cool extras including an animated guide to some of the best creatures from the movie, a guide to drawing the creatures from The Croods (for all you young budding artists) and Belts cave journal. You need to see the movie to understand this last one. And lets not forget the obligatory collection of deleted scenes.

Considering the TV channels dispensed with Christmas cheer when they decided depressing, repetitive, poorly acted, poorly written and truly awful kitchen sink dramas deserved to be shown on Christmas afternoon you need something like this to cheer you up. Even Downton Abbey ended on a depressing note last year. Do people really enjoy watching misery on Christmas day? But I digress….

So if you fancy watching some genuinely funny and family friendly entertainment on Christmas day then why not buy The Croods for one of your children, or maybe the big kid in the room, and put a smile on every ones face. After all, isn’t that what Christmas is about.

Disclosure: We received The Croods DVD for the purpose of this review. No payment was received.

The Look Out Centre – Discovery

The Summer Peppa Came to Stay