Last Saturday started with us rushing to the hospital as you had stream of blood in your poo poo. My heart was pounding but despite your strange nappy you were still happy, smiling and a chatter box.

The wait at the hospital was short but felt so long….for me…and for you because you just wanted to go and walk around and explore…

As soon as the doctor came in you started to cry. And I started too. You hate people dressed in white I know. She said you are dehydrated and then wanted to see the dirty nappy I had in a bag…Her reaction…Why couldn’t she control it? She looked scared and then said:

“You need to go to the Hospital for Infectious Diseases right away! Do you want an ambulance or you can drive?”

I felt like I am going to faint..and between that and your crying…the rest of the doctor words were like a mumble…I couldn’t understand what she was saying and why she wanted to take you so far away? My dad spoke to her in the end and soon we left home to prepare for the next hospital visit.

At home..you kept crying for your sister but because the doctor said that it will be best not to get in contact with her she had to stay at her grandmother house. The packing of clothes and nappies was done between my tears and yours. In the madness I manage to even leave my purse at home so when we finally got to the other hospital, after a long half an hour, it was quite hard for them to identify us.
There in the emergency room we had the same reaction…when they saw the nappy:

“You need to be hospitalised now! You could be here for up to a week as she is really young and things can go wrong pretty fast!”

My heart was pounding and all I wanted them to tell me is that you are OK! I didn’t want them to tell you are in danger! The diagnosis was ENTEROCOLITIS! They wrote something else in there that was just saying is really bad but I can’t remember it just now.

I immediately started to cry…how can we stay in a Romanian hospital? The system is a lot worse than it is in England. The doctors are really good but the state of the wards is the same as it was in the communist times….4-5 people in the same room…My head started to hurt even more and if my dad was not with us..I really don’t know what I would’ve done. On the way to the children wards I kept crying…you were looking at me really worried and wiped my right cheek with one of your little hands.
I wanted your daddy with us and I didn’t want to be away from your sister either. All I wanted is to go back to the day before when everything was ok.

My fears were confirmed when the nurse walk me into the first ward…the look of it..the smell…and the fact that there were already 5 toddler in there running around plus their parents…made me…say “No…” and turned around and leave the room. If I had to keep you in there with all those ill kids…i would’ve rather take you home and treat you!
But as it happens in the romanian hospital system that was more to scare us. I don’t think she wanted to take us there and then a little tip put by my that in the nurse pocket made her talk to her superiors and take us into a room that was only for us. The room was not at the standards that we were used in UK but it meant that we were by ourselves and we had our own toilet and shower. Thank GOD.

But then I sat down on one of the beds and started to look around at the grimm…the floor…once white was dirty and had hairs left from previous patients…the beds were made out of metal and old and rusty…the mattresses had holes in them…
Out of the three beds in that room I chose the best one and then another nurse came in…She needed to collect blood from you and she sent away my dad. As soon as you saw her you started crying and she started to get angry and talk nasty!

“Keep her tight!” “I have to hurry i don’t have time for her crying or yours” (she said to me)
Seriously? Why did she had to be so rude?

I even started to ask…why do you have to be so…but then stopped as my tears were running down my cheeks and I tried to stay strong for you!

She had to stung you many times before she finally find a vein that was allowing her to take your blood for tests and to leave a branula for the drip. When she finally did it…you were so exhausted you fell asleep really fast… 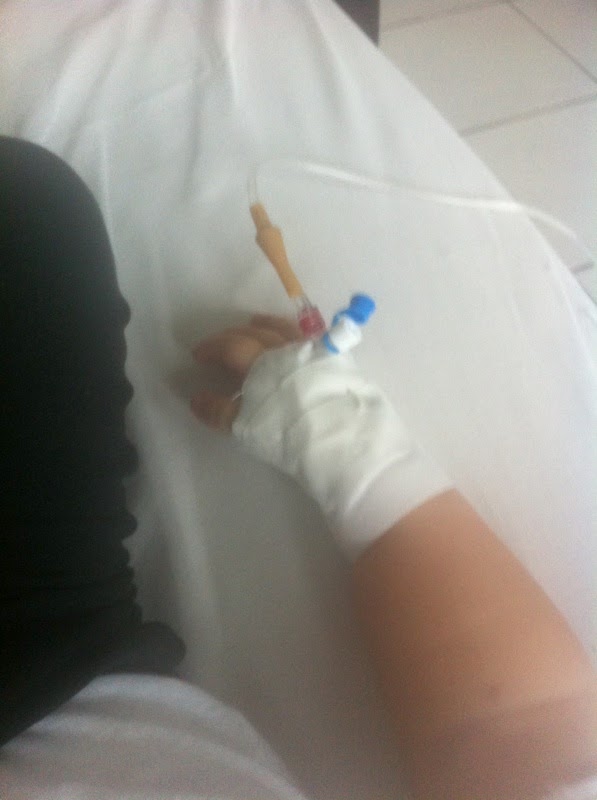 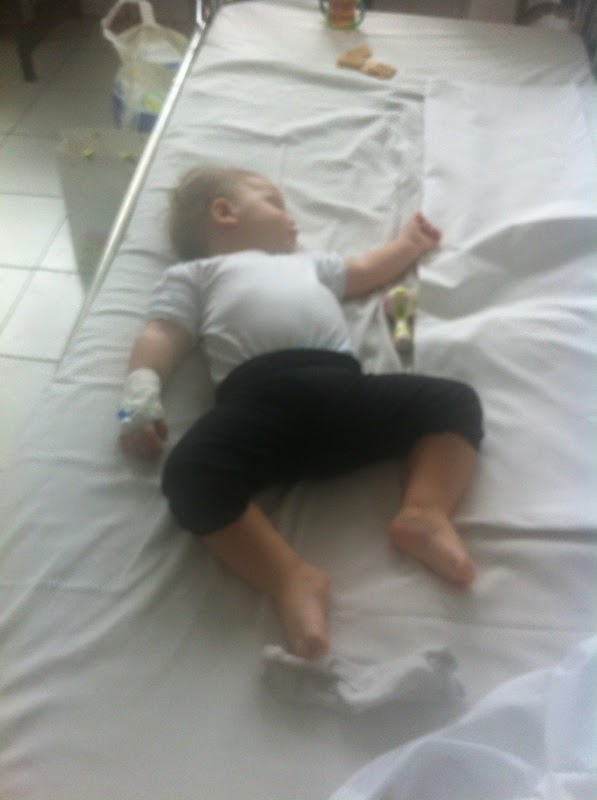 Soon after your grandad had to leave and I felt lost and without control. How can I make you better? I felt alone and useless. There was nothing I could’ve done to make you better and go home to your sister! I had to be patient and patience is not my strong point! I was useless! Besides watching you and making sure you will not wake up and fall of the bed there was nothing else i could’ve done!

I text your daddy, your aunty Simina, my friends and spoke to my friends on Facebook. I had to do something as I felt like I was losing it. This certainly didn’t help my ever existing depression!
It was my fault you were there! Why didn’t I protect you well enough to stop this happening to you?
I felt like a crap mother! One that can’t protect her child from simple things like this!

The rest of the day in hospital is a blur right now….You spent most of the day with a drip and the rest of the time moving around the room. While you were sleeping I tried to clean the room as much as possible with the antibacterial wipes that I had with me. It wasn’t enough though…The place needed a disinfection! That came later in the evening… At least we had clean sheets on the bed but nothing to cover ourselves with. Later she housekeeping brought some blankets that were really hard on the skin so i refused to use them and asked for our blanket from home.

The night came upon us and we had to sleep in the same bed. Cosy again after almost a year since you stopped sleeping with me. It was nice in a way but that meant I had to sleep on my bum or on the metal side of the bed most of the time. I didn’t care as long as you were getting better. The first night we were woken up every couple of hours for treatment…As soon as you fell asleep someone else was coming in slamming the door and putting the lights on. But..at least they were taking care of you..and the nurse was quite nice and caring.

In the morning we met your doctor – a lady called Marcas Consuela…- who strongly announced that your blood tests show the count of leukocyte at 17700! Way high for a baby your age and way out of the normal range: 4500 – 10000. She was really serious and made me understand that you have to stay in the hospital until these drop and until she understand why you have enterocolitis. It was important to know what type of enterocolitis you have to viral or microbial and we could only find out in a couple of days when the poop results were coming out.

So we stayed. Sunday evening in the middle of the night some another patient was admitted in our room and that woke you up. It was really hard to fall asleep after that and you cried for several hours. And I cried with you.  Again when you finally fell asleep you are woken up in the earl hours by the same doctor who was now angry with me because I asked about the conditions to leave and if we can transfer to a private hospital. I refused to go because it was way too early( 6 am) and the results were not out yet.

You felt a lot better though and the fact that we now have somebody else in our room made you happier. The staff was really nice that day and later we found that your poop results came negative for the microbes. Your enterocolitis was viral and could’ve been cause by the fact that you were treated with antibiotics for two weeks earlier in the month.  Thanks GOD! We knew that the doctor will release you the next day but I was still worked about the high count of white blood cells.

The next day, tuesday and the day we actually left the hospital the WBC count was 7000. What a relief! What it’s still worrying though is the rect that the doctor still wants to talk to us about the results so tomorrow we will be driving to Constanta. I am worried for you my baby girl and I am praying that all will be well and it’s just a formality.

Since we’ve been home yesterday you slept lots and lots and act like you again. You have to stay on a regime and stick to bland food and milk without lactose but you are home and home it’s a lot better. I never ever want to see you as ill and sad as the last couple of days. By the end of our hospital stay you were so used to the doctors and nurses coming in for treatment and blood that the last time they took your blood you didn’t even blinked.

I love you so much and from now on I will try and do whatever I can to stop you from ever going into a hospital again!

My reasons to smile